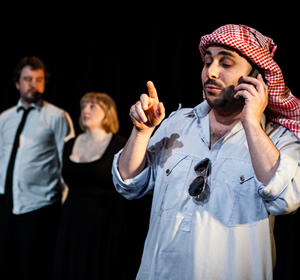 His sitcom, Yo Valet, beat over 400 other entries to claim the £5000 prize. The comedy centres on two put-upon valet parking attendants, Steve and Don, who work at a five star London hotel owned by a wealthy young Prince (pictured).

Naik says: "The idea for Yo Valet came to me during a toilet break at a Sitcom Mission writing workshop. Now it has won, my mind is blown. I want to thank my bladder for being so weak and Declan and Simon for the workshop. Without all three this would never have happened. I want to thank the cast; they were brilliant. Finally, I would like to dedicate the award to every single person who entered The Sitcom Mission this year. To any of you that have ever doubted your ability, three words. Don't give up."

Yo Valet was one of 16 entries showcased live this year, with the finals taking place over the previous week at The New Diorama Theatre in London. The other entries to make it through to the grand final were Medicine to Follow, written by seasoned TV and radio writers Steve Keyworth and Mark Clompus, The Staff by former Empire editor Emma Cochrane, and Keep Off The Grass by newcomer Sarah Christou. 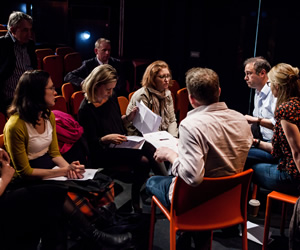 The Best Actor award went to Hemi Yeroham for his portrayal of Prince Khalifa, the hotel owner in Yo Valet, whilst Elicia Daly was named Best Actress for her portrayal as the slightly unhinged Nurse Florence in Medicine to Follow.

Simon Wright and Declan Hill, the producers of the competition, comment: "We're absolutely delighted for Snez and his wonderfully funny script. You have to be brave to write a sitcom about a hen-pecked hotel owner and his put-upon staff, but his characters are original, fun, witty and warm. It was a strong year, and we'd like to congratulate all of the Grand Finalists for setting the bar high. We'd also like to thank the other 400 writers who entered, all of the actors who brought the characters to life, the judges for their time and support, and especially Jimmy Mulville and his brilliant team of Anna Silver, Sarah Cartwright and Paul Cohen at Hat Trick Productions for backing us once more."

The Sitcom Trials (the show from which The Sitcom Mission sprang in 2009) continues with shows in London on May 24, Bristol June 29th and Manchester July 20th. Details at sitcomtrials.co.uk
Posted by Scottish Falsetto Sock Puppet Theatre (and Kev F the comic artist) at 02:48