A nice review of the Manchester Sitcom Trials heat of So You Think You Write Funny, from North West End's Poppy Stewart. 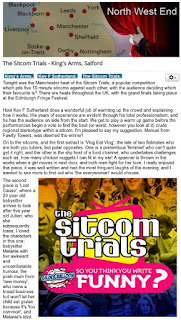 Tonight was the Manchester heat of the Sitcom Trials, a popular competition which pits five 10 minute sitcoms against each other, with the audience deciding which their favourite is? There are heats throughout the UK, with the grand finals taking place at the Edinburgh Fringe Festival.

Host Kev F Sutherland does a wonderful job of warming up the crowd and explaining how it works. His years of experience are evident through his total professionalism, and he has the audience on side from the start. We get to play a warm up game before the performances begin a vote to find the best (or worst, however you look at it) crude regional stereotype within a sitcom. I'm pleased to say my suggestion, Manuel from Fawlty Towers, was deemed the winner!


On to the sitcoms, and the first extract is 'Vlog Eat Vlog', the tale of two flatmates who are both you tubers, but polar opposites. One is a pretentious 'feminist' who can't quite get it right, and the other is the shy host of a food channel, who undertakes challenges such as, how many chicken nuggets I can fit in my ear! A spanner is thrown in the works when a girl moves in next door, and both men fight for her love. I really enjoyed this piece, it was well written and had the most frequent laughs of the evening; and I wanted to see more to find out who 'the everywoman' would choose.

The second piece is 'Lost Cause', where a 29 year old babysitter arrives to look after five year old Julian, who she subsequently loses. I loved the characters in this one; babysitter Melanie with her awkward and uncomfortable humour, the posh mum from 'new money', who owns a bread business but won't let her child eat gluten because it's 'too common', and Melanie's idiot brother. There were perhaps not as many laughs as the first piece, but again, I really wanted to see the ending!


The third sitcom, 'Babestation', was slightly unusual in its format as it was presented on video ¬- its actors being University students who are away for the summer! I particularly liked the two young characters in this one, the experimental new director who is full of unusual ideas, and his hapless assistant. However we weren't left on a cliff-hanger as with the others, as the ending was fairly obvious (although I could be wrong, we will never know!)

The fourth scene was entitled 'Adam and Eve and Steve', and was set in the Garden of Eden. This was probably my least favourite sitcom of the evening, although I did enjoy the character of 'Keith' the snake, and it was an interesting twist on the original story. I can see this being filmed in a Monty Python-esque style.

We were also treated to another audience game of pitching our own sitcom, the winner being 'Putin On The Ritz', when Mrs Putin thinks Vladimir is getting fat, so puts him on a diet of savoury crackers! Now there's a sitcom I would love to see.

After the audience vote it was revealed that 'Adam and Eve and Steve' was the winner, and would advance to the next stage of the competition. It's not what I would have picked, but that's the beauty of theatre, TV, and life, everyone likes different things and that's alright!