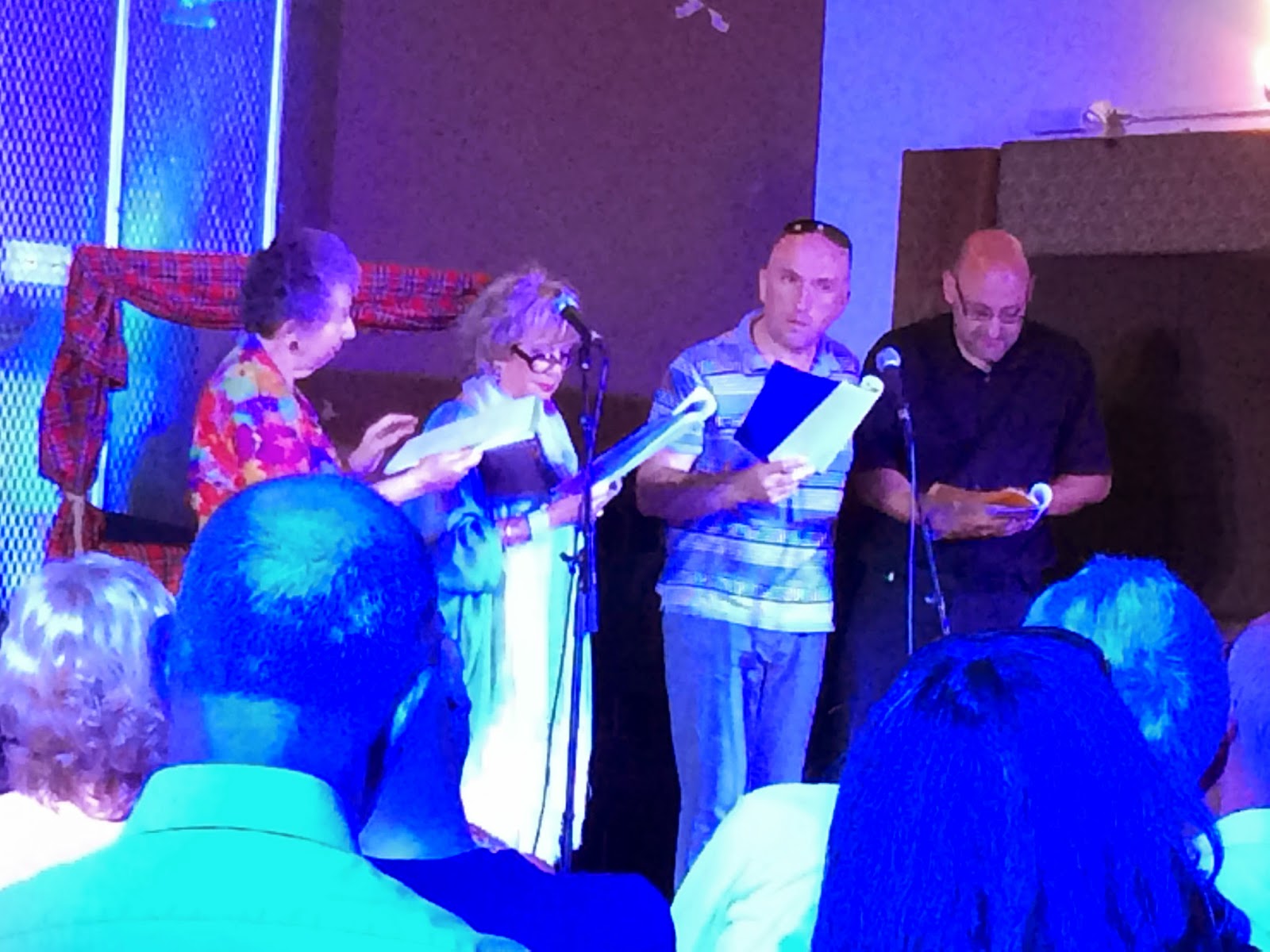 The Sitcom Trials made a small return of sorts last night when Bristol Alumni Simon Winkler and Jason Stevens staged a mini-Trials for the guests at Tammy's birthday and graduation party. With the able assistance of actresses Liz Morgan (the voice of Destiny Angel in Captain Scarlet, now you ask) and Pameli Bentham, they performed classic Trials script Man's Best Friend by Roland Moore, to the amusement of a small crowd of family and friends. Because of pressure of time, they didn't actually do the Trials format, but this was a pleasant nostalgic throwback from the team who'd had such fun doing the Trials circa 2005.

As you can see from the photo, fellow Trials graduates The Scottish Falsetto Sock Puppet Theatre also performed. And as you can also also see, the lighting was from LED lights which always photograph in that weird "blue is the new black" way. How does that work?
Posted by Scottish Falsetto Sock Puppet Theatre (and Kev F the comic artist) at 00:35 No comments:

One of the best known places in the world to gamble is the city of Las Vegas, Nevada. Here hundreds of casinos are congregated in one place making it quite easy to enjoy gambling in numerous venues while on holiday. Additionally, the Vegas casinos also offer numerous other entertainment options for their guests, a somewhat important addition given that casino games are offered online nowadays at sites like River Belle. One of these includes comedy shows. Many casinos offer their own as part of their overall entertainment package.

Aces of Comedy is one of the best comedy shows. Located at the Mirage Casino, this particular show has won awards over the years. Top tier comedians perform here, many well-known names. For instance, Ron White, Wayne Brady, Kathy Griffin, Jay Leno and Ray Romano are just a few of the performers who have been showcased at the Aces of Comedy.

The Improv at Harrah’s Las Vegas is another place that visitors should go to if they want amusing entertainment. This show has been voted number one year after year. There are two shows every night which makes it easy to fit in some humour around one’s casino gambling time. The first show commences at 8:30 pm and the second at 10:00 pm. Three comedians perform every show and often will stick around after to visit with guests and sign autographs.

A third comedy show to visit while in Las Vegas is Brad Garrett’s Comedy Club at the MGM Grand. Headliner Brad Garrett appears here frequently along with guests. Shows last for 90 minutes and begin daily at 8:00 pm. Ticket prices vary and generally are cheaper on the dates that Brad Garrett isn’t scheduled to perform. When Brad is performing, he can often be found at the front door prior to shows greeting his guests. The venue was built specifically for this purpose and is quite new.
Posted by Scottish Falsetto Sock Puppet Theatre (and Kev F the comic artist) at 09:05 No comments: