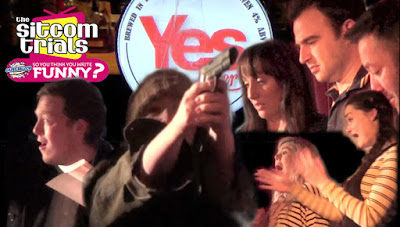 Here are the video highlights from the Glasgow Sitcom Trials So You Think You Write Funny show at Yes Bar on Monday April 11th. Click to play.

The 5 sitcoms, selected from the entries into the SYTYWF competition, were:

And the winner of the audience vote on the nights was...?

The Graduettes  by Sean Wilkie

This was not a formal Heat of the SYTYWF competition, that will be taking place in June. This was an informal show to give a hearing to some of the material in the competition, and no decision has been made yet as to which material will be appearing in the Heats. Thanks to everyone who came and all who took part, we look forward to seeing you at the subsequent shows.

Posted by Scottish Falsetto Sock Puppet Theatre (and Kev F the comic artist) at 00:38 No comments: