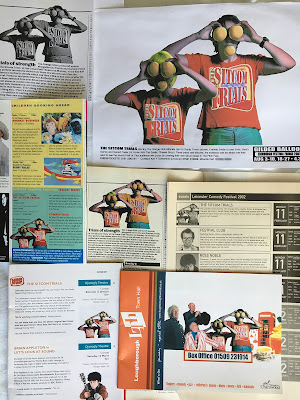 In a folder that I was very nearly about to sling into the recycling unopened, I've just found a delightful treasure trove of memorabilia from The Sitcom Trials first tour, which followed our Edinburgh Fringe debut of 2001. The tour, in the spring of 2002, was only 8 gigs long, but being the first I'd ever promoted was quite a little triumph for me and set the template for how I would go on to produce the, slightly longer, Scottish Falsetto Sock Puppet Theatre tours of subsequent years.

These souvenirs are from the first four shows on the tour, in Leicester, Loughborough (both part of Leicester Comedy Festival), Cirencester, and Nottingham, and a London show at the Amused Moose, all of which starred the Edinburgh cast of Miranda Hart and Charity Trimm (who graced all our promotional materials, in a photo lifted from their own show with Sitcom Trials t-shirts Photoshopped in), Gez Foster and Dan Clegg. After these five gigs they decided they'd had enough of the show, which was much of a money maker once our meagre fee had been split five ways, leaving me to recruit and rehearse a new cast for the subsequent shows (in Glasgow, Reading, Gloucester and Warrington, now you ask). This I then did.

Amazingly this little period of Miranda's showbiz history hasn't featured heavily in her various autobiographies, and I confess I'd forgotten much of it (Cirencester, for example, was a Pointless answer I would never have got in a hundred guesses) but it's a pleasure to see I've hung onto these mementoes of that formative time in our various careers. 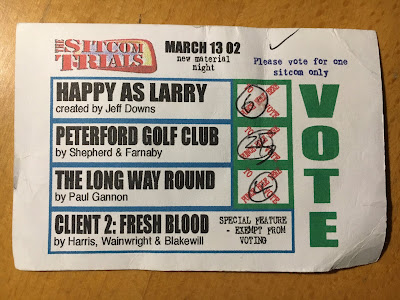 And this just turned up in the same box of trivia, a Sitcom Trials voting form from a long forgotten New Material Night, held at the Comedy Pub in London in march 2002. And winning on the night, with 25 votes to the others 6 and 4, was Peterford Golf Club by Shepherd and Farnaby. Waen Shepherd went on to become the legendary Gary Le Strange and have a regular part in The Inbetweeners, and Simon Farnaby has been a regular in Horrible Histories for some years and currently portrays a dead politician in Ghosts.

Whatever did happen to The Sitcom Trials?

Posted by Scottish Falsetto Sock Puppet Theatre (and Kev F the comic artist) at 08:20 No comments: