And if you fancy yourself as a sitcom writer of the future, this year The Sitcom Trials runs So You Think You Write Funny, a competition culminating in a final at the Edinburgh Fringe. It's free to enter, details are here.

Posted by Scottish Falsetto Sock Puppet Theatre (and Kev F the comic artist) at 07:53 No comments:

The first Sitcom Trials of 2013 took place at The Wardrobe Theatre, Bristol in front of a packed audience, showcasing five sitcoms, all chosen from online entries, with the audience voting for their favourite. The five sitcoms in contention were:
Unimpoverished Youth by Oliver Ley
Theatre by Andrew Tate
Face-Time by Brian Teles
Cliff and Elaine Fall Out by Aaron Caris
Midnight Music by Neil Tollfree

And the voting was very close with just one vote separating the top three, as chosen by the audience. The results were:
In third place Unimpoverished Youth
Runner-up Cliff and Elaine Fall Out
and the winner was...

A splendid show all round, with a marvellous audience whose laughter should hopefully come across well in the video that will be appearing later, and the highest quality of scripts and performance. It is worth noting that the winning sitcom, Brian Teles Face-Time, had been the most popular online entry for last Autumn's Sci Fi Sitcom Trials then failed to make the cut when it was given table-readings in both Bristol and London.  Following a rewrite it has triumphed on the night, so extra congratulations for a very successful bit of development by producer Vince Stadon and his team.

The winning Pitch Fest entry (the audience's suggestions for sitcoms) was The Narcoleptic Family Robinson, written by author of tonight's runner-up sitcom Aaron Caris, who had travelled down from Manchester for the show (btw the Manchester Sitcom Trials return later this year).

Thanks to everyone who came to the show, and to producer Vince Stadon and director Louisa Smith for their outstanding work, and for letting me (Kev F, the show's creator) host the show. The video should be appearing soon, stay tuned.

This year The Sitcom Trials runs So You Think You Write Funny, a competition culminating in a final at the Edinburgh Fringe. It's free to enter, details are here.


Posted by Scottish Falsetto Sock Puppet Theatre (and Kev F the comic artist) at 00:16 No comments: 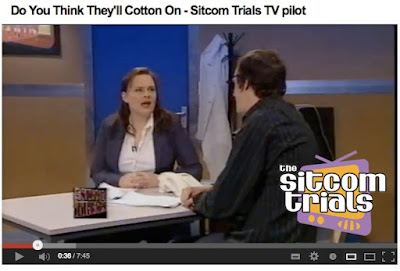 There's a Sitcom Trials taking place at The Wardrobe Theatre in Bristol this Friday Feb 22nd and I've just realised, spookily and completely coincidentally, it is taking place on the 10th anniversary exactly of the live broadcast of episode 1 of The Sitcom Trials' ITV1 series. Here we see Wanda Opalinska and Gerard Foster in the first episode's sitcom Do You Think They'll Cotton On? by Brian Meenagh, which has yet to find its way onto YouTube. Stay tuned. The ITV series ran for 8 weeks, every Friday night at around 11.30pm (times varied as a result of our clashing with the 2nd Gulf War) with two sitcoms going head to head, the audience voting by phone and text, and the ending of the winning sitcom being performed. All live. See a selection of episodes in the Sitcom Trials video archive.

PS: It has just been pointed out to me that the first episode of the TV series actually went out on Friday Feb 21st 2003, which makes this week's show less spookily coincidental. Don't tell anyone. Here's my report written at the time.
Posted by Scottish Falsetto Sock Puppet Theatre (and Kev F the comic artist) at 04:40 No comments: