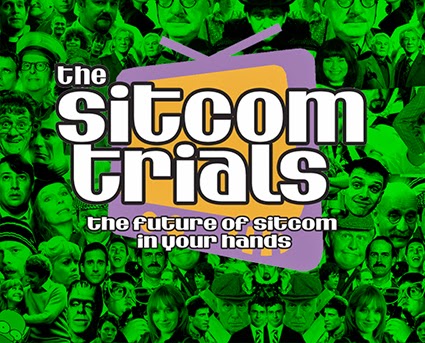 You wait ages for a new Sitcom Trials to turn up, and suddenly three come along at the same time*. No sooner have we announced the inaugural Midlands Sitcom Trials, taking place in Birmingham on July 3rd, we are delighted to announce the return of the Manchester Sitcom Trials on June 21st and the first ever Cardiff Sitcom Trials on July 28th.

And your scripts are invited for all three shows now!

Yes, if you would like the opportunity to see your situation comedy script performed on stage and voted on by a live audience, please send them in now, the deadline is May 22nd.

2) Go to the Group Files here, and follow the instructions marked "Sitcom Trials Summer 2015, how to enter a script (READ BEFORE ENTERING)"

*Joining the Facebook Group is different from Liking the Sitcom Trials Facebook page, though you're advised to do both. The Group is a closed group & therefore more private.

Posted by Scottish Falsetto Sock Puppet Theatre (and Kev F the comic artist) at 22:50 No comments: 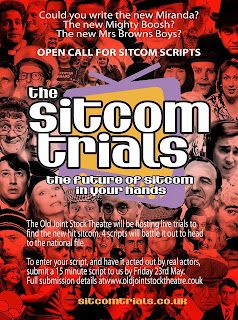 Are you a budding script writer in the midlands?

Along with Foghorn Improv, we will be hosting The Sitcom Trials midlands division at The Old Joint Stock Pub & Theatre on July 3rd.

Producer/Performer Aaron Twitchen writes: We are currently doing an open call for scripts. See details below. Please share and enter. I, personally, would love to see a script with a strong, handsome, vest-wearing, brunette male lead in his mid-20s.

Your script must have no more than four main characters and a first 'half' of less than ten minutes. This first half should ideally end in a cliffhanger, or something that leaves the audience wanting more. It must then have a second 'half' of no more than five minutes long; after the audience have voted, the top two favourites will battle it out and perform their second 'half!'
Scripts will be performed by resident improvisation group, Foghorn Improv, and a selection of other local professional actors.

Please put your name, email address, and the title of your sitcom on the first page of your script, and send it as a PDF file. Entries must be submitted to scripts@foghornimprov.com by Friday 22nd May.

We're in the process of setting up the Radio Sitcom Trials, and we'll offer the writer of the winning sitcom the chance to have their script recorded as a full-cast audio play (with music and FX) and then hopefully broadcast on BBC local radio sometime this year.
~
Just want to come along and watch?

A selection of the top entries recieved will be performed on Friday July 3rd at the Old Joint Stock Theatre in an exciting rehearsed-reading radio-style affair! These sitcoms will be in competition with each other, the winner to be decided by an audience and panel vote.


Posted by Scottish Falsetto Sock Puppet Theatre (and Kev F the comic artist) at 23:41 No comments: