Mrs Brown not the first live sitcom in 60 years - we were! 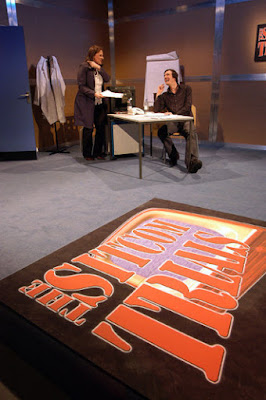 The BBC are announcing a live episode of Mrs Brown's Boys, as part of their Landmark Sitcom Season, commemorating 60 years of TV sitcom. Reading between the lines, the inference is that this will be the first live TV broadcast of a sitcom since the 1950s. But, of course it won't.

From February to April 2003, every Friday night at 11.30, ITV broadcast The Sitcom Trials live from their HTV studios in Bristol. In each of the 8 episodes, two brand new mini-sitcoms were performed, then the audience voted, during the ad break, for which one they wanted to see the ending of.

Episodes included a pair of improvised sitcoms by the Comedy Store Players, a solo sitcom by James Holmes (who went on to co-star in fellow Sitcom Trials alumnus Miranda Hart's eponymous sitcom), a historical themed pair of comedies, two set behind the scenes in the TV biz (one written by Roland Moore, who went on to create BBC's Land Girls), a sitcom devised by the schoolkids of the HTV Television Workshop, and in the final week two sitcom scripts sent in by viewers.  In all 16 new sitcoms were piloted in the competitive head to head format.

In the days before social media, the voting was done by phone and text, and we learned very quickly that you don't get very many phone calls through the system during a 4 minute ad break. So it was a very small, and quite possibly unrepresentative sample, that decided which sitcom would have its final few minutes performed and be declared that week's winner. Don't worry, whenever we do a second series we'll make sure that doesn't happen again.

Many of the sitcoms from The Sitcom Trials live TV series can be found on YouTube here.

The next Sitcom Trials takes place in Manchester on October 24th and is a Halloween Special. Scripts are welcomed from any budding sitcom writers, and the Sitcom Trials is free to enter (as always). The deadline for scripts is October 10th. Details are here. 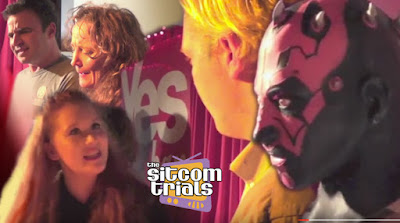 The Glasgow Sitcom Trials took place at the Yes Bar on Sept 8 2015, here are the video highlights. Click to play.

You can see each of the five sitcoms in contention, in full, here:

And the winner of the audience vote was..? (Watch the video to find out)
You can also see the winning sitcom in full here.

Or if you fancy the whole thing from a totally different camera angle, it's in full here.

Announcing a brand new Halloween Sitcom Trials, taking place in Manchester on October 25th 2015 at the Kings Arms, Salford. And your scripts are wanted now.

We want sitcom scripts that we can perform in the tried and tested Trials format (a 10 minute sitcom ending in a cliffhanger with a 3 minute payoff scene, to be performed by no more than 4 actors, you'll see details in the files). And this time, though you can write your sitcom on any subject, we're particularly looking for scripts with a Halloween or horror theme.

If you want to enter a sitcom, go to the Sitcom Trials Facebook group (not to be confused with the Facebook page) where you will see the Files. Upload your script to there (as a PDF or .doc) and it will then be subjected to an online script reading, open to all. You will be invited to join in with this script reading and you will be asked to vote on the scripts in contention.

The deadline for script entries is midnight Saturday October 10th, after which we'll have a week to vote on them and choose the scripts to be performed by Sean and the Manchester Trials team on Sunday 25th. (The show will also include at least one sitcom devised by Sean and the team).

Posted by Scottish Falsetto Sock Puppet Theatre (and Kev F the comic artist) at 14:11 No comments: 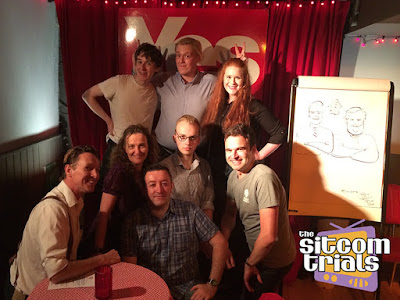 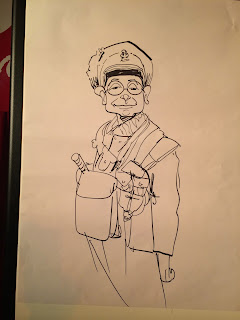 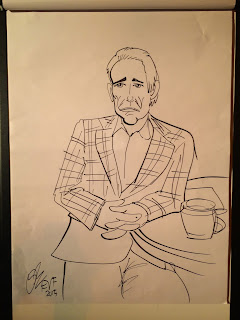 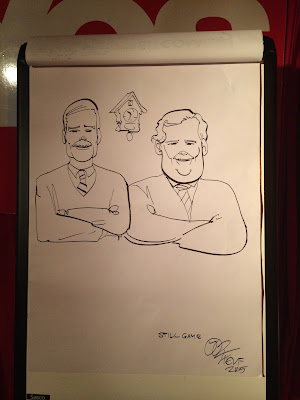 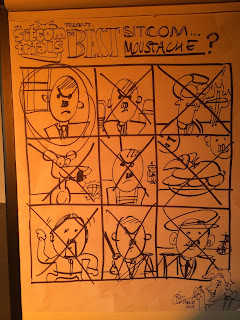