A quiet year from The Sitcom Trials 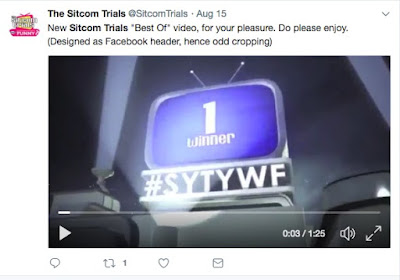 Hello everyone, and hasn't The Sitcom Trials been quiet this year? I can only apologise.

I can't help noticing this blog has only featured two posts all year so far, and one of those was an advertorial. Such a change from 2016 when we ran our biggest ever tournament, straddling the country, with our most successful final and the highest quality of entries any of us had seen.

After such a successful final, everyone's buzzing and talking about how we should do this again. Then what happens? Well, in my case I get the bill and realise that, try as I might, I've never managed to turn a profit from The Sitcom Trials. I also look at my workload and see how much time it takes, and the showrunners of all the various heats do the same.

So it was that, through 2017, I toured Socks Do Shakespeare, and the various members of the Sitcom Trials teams went on to great individual success, boosted no doubt by our experience with the 2016 Trials.

There's been talk of a few things that might revive The Sitcom Trials for 2018, including a probable podcast and the ever-tempting prospect of crowdfunding another tournament. And, if there's interest, any of these things can still happen.

In the meantime, thanks to everyone who's checked in sporadically through the year to hear what's new, and a very Merry Christmas & a Happy New Year when it comes, to us all.


Posted by Scottish Falsetto Sock Puppet Theatre (and Kev F the comic artist) at 01:47 No comments:

Cloud Computing in Simple Terms: Why Store Data With NuoDB?

The cloud was once a buzzword known only to a select few. Now, it's fully integrated with the collective consciousness, making a name for itself in ads, product descriptions and casual conversation. Many people, however, remain unaware of what the cloud actually means, and telling them that it's a type of distributed computing doesn't always clarify the issue.

The cloud is just a more specialized form of computer network. Like any regular office or enterprise network, it consists of connected computer hardware. The main difference, however, lies in the way it's put to use and how it fulfills its purpose.

Traditional network architectures are built around machines that use data connections to augment their efficiency and capabilities. With the cloud, networking is integral to functionality. Purpose-built cloud apps work to get the most out of networking by storing information more efficiently, running programs with the aid of increased computing power or ensuring that data is always available to remote users. Although you can theoretically create a cloud computing implementation in the same data center or local server pool that you'd use for a regular network, the software tools that you include in your deployment make a big difference in its functionality.

Distributed computing in the cloud takes various forms. For instance, you can set up a media server implementation that lets users stream content such as films or music. Or you can create an app that allows multiple team members to access documents remotely and share their edits. Cloud implementations power everything from mapping software and social networks to basic remote storage tools that let subscribers save local space on their personal and office machines.

Why Are so Many Companies Using the Cloud?

It's worth noting that the cloud can handle most of the programs that you might run on a local server and vice versa. This begs the question: If you could just use a local machine, then why would you make the switch?

Distributed computing has a number of advantages over more traditional alternatives. Chief among these is the fact that since cloud software has its roots in internet-connected network architectures, it's much easier to create apps that people can access from anywhere. Cloud-based storage appeals to those who want to save space on their devices, share information and retain the ability to access their data no matter where they are. Running enterprise or consumer-ready software in the cloud gives businesses the power to deliver full-featured, instantly available apps with native collaboration and sharing built in, which helps companies stay competitive in an increasingly data-hungry modern world.

NuoDB: How Does Cloud Storage Work?

Of course, the cloud isn't perfect, and one of its unique problems lies in the realm of data storage. Traditional cloud database architectures like SQL make it impossible to scale up on-demand. Although alternatives like NoSQL resolve some of these issues, they force you to insert your data management code into the application layer or adhere to a small subset of usage cases, which can pose huge problems when you want to add new features. NuoDB helps you solve these problems with a novel approach known as NewSQL.

NuoDB's technology permits intelligent, shard-free scaling that minimizes storage complexity and actually leverages distributed computing to run faster as new servers are added. Unlike many implementations, it's also made to scale predictably, comply with SQL and free you from having to work with a single vendor to get the flexibility that your cloud deployments deserve. Learn more about the advantages by visiting nuodb.com.

Every year there are stars who've passed through the ranks of The Sitcom Trials shining bright at the Edinburgh Fringe. 2017 is no exception. Here are 5 of the best (if you know of more please tell us). 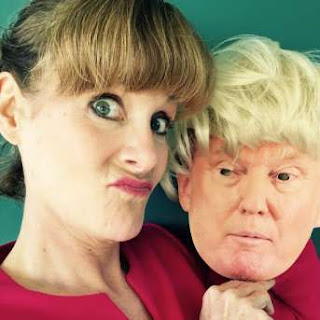 Kate, along with Vanessa-Faye Stanley, won last year's Sitcom Trials So You Think You Write Funny final at the Gilded Balloon, and now she's back to claim her prize. Her satirical one-woman comedy All Hell Toupee sees Kate (who you may recognise from everything from Downton Abbey to Love Actually) performing a dazzling array of characters, in a variety of hairpieces. We are all hiding but what happens when the mask, or in this case the toupee, slips? Find out August 7 - 13 at the Gilded Balloon. 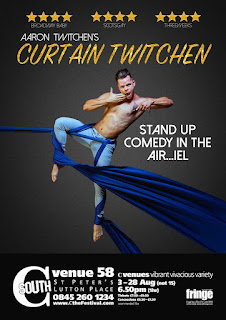 Aaron was a star in the 2016 Sitcom Trials tournament, running the Birmingham heats of the show, and performing in the final. This year he brings his first solo show, Curtain Twitchen, to Edinburgh, combining aerial circus skills with stand up. Mixing stories of friendship, love and wine with jaw-dropping stunts on the aerial silks in a gossipy cabaret explosion, Aaron Twitchen takes comedy to highs you've never seen before... literally. At C Venues from the 6th to the 28th.

Rosie won 2013's Sitcom Trials So You Think You Write Funny final at the Gilded Balloon, and this year returns on a double bill with Christian Talbot - Holt and Talbot Can't Stand The Sight Of Each Other. Thrown together through financial necessity, can they stay civil to each other for an entire month of shows? Find out at Sweet Grassmarket from the 7th to the 27th

Charity Trimm was the star of The Sitcom Trials' very first Edinburgh run, back in 2001, alongside her then comedy partner Miranda Hart. Anne-Marie Draycott starred in The Sitcom Trials' fondly remembered ITV series in 2003, then in the Trials' last month-long run at the Fringe in 2004. Now, writing together, Draycott & Trimm have created Class Mates, a comedy which takes one community centre, three evening classes, six skill-seekers and stands back. Performed by A Dash Of Theatre at The Space On The Mile, Aug 7 - 25. 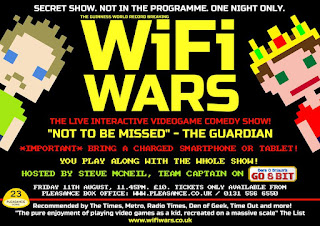 2009's Sitcom Trials winners are a bit too successful with their TV show Go 8 Bit to be bothered with spending whole months in Edinburgh right now, but Steve McNeil will be up on August 11th to do a one-off WifiWars.

Let's close with these words of advice he offers to all folks putting on a show this month:

Good luck Edinburgh chums! Just remember:
1. student reviewers' opinions are utterly worthless and you are the only person who'll ever read their thoughts about you from start to finish. people you know *might* glance at the stars, but they're already thinking about themselves again
2. audience sizes are only occasionally proportional to merit
3. all deep fried food is delicious
4. waterproof shoes
5. stick with it - if McNeil & Pamphilon can get on TV, literally anyone can
6. no real people have ever heard of Chortle
7. climbing arthur's seat is a dreadful idea. have a biscuit instead
8. spend every free moment with people you like. you won't meet up back in London except at gigs because you're not weird
9. umbrella
10. Would love to have some friends at WiFi Wars on the 11th August at the Dome, it's a big one for us - we've got Angry Microwave in
xxx

The Sitcom Trials is taking a break at the moment but could return at any time. Stay tuned.
Posted by Scottish Falsetto Sock Puppet Theatre (and Kev F the comic artist) at 03:29 No comments: