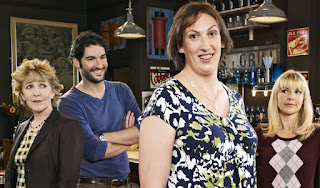 Hart denies press reports
Miranda Hart has denied reports that her sitcom will return for a fourth series later this year.
The Sun claimed that the BBC has persuaded the comic to commit to another run, six years after the last.
But she last night tweeted several denials to the story, one simply saying: ‘Not true.’ Although she didn't rule out the idea altogether.
In response to the tabloid’s initial story, Hart said: ‘Don’t know where this came from, it’s news to me. Have thought about it but that’s all…
‘I don’t know where it came from that there’s a new series of Miranda. I write and play her and she’s still on honeymoon!’
The Sun’s speculation rests on an unnamed source, who said: ‘Miranda has always been a huge hit on the BBC so getting her to sign up for another outing is a great result for them and viewers… All parties have come to an agreement and it’ll be back later this year if all goes to plan.’
Hart’s sitcom ran for three seasons from 2009 to 2012, achieving an audience of more than 11.5 million at its peak.
A two-part Christmas episode in 2014, in which her character married long-term love interest Gary, played by Tom Ellis, was meant to draw a line under the show,and was even entitled The Finale.
But the sitcom has been the subject of frequent comeback speculation. Ellis has previously spoken about ‘revisiting’ Miranda, catching up with the couple in their married life with children.
In 2016, Sarah Hadland, who plays Miranda’s best friend Stevie, said ‘there will be something’ when asked about a cast reunion, and last summer Hart and Ellis – who now stars in Lucifer – were said to have arranged a meeting to discuss a return to the sitcom.
Speaking on The One Show in October, Hart said: ‘The lovely Tom Ellis was saying… that he’d like to see Miranda and Gary married. Now he’s got me thinking!
‘There’s a thought there, to explore the comedy of marriage. Particularly early life marriage and how that would work. I’d quite like to see that.’
Since the sitcom ended, Hart has written books and performed in Annie on the West End stage. She had been set to revive both Frankie Howerd’s Up Pompeii! and classic gameshow The Generation Game, but pulled out of both. The latter will now be presented by Mel and Sue.
She presented the one-off Miranda Does Christmas for Channel 4 last month, as well as  The Royal Variety Performance on ITV, which included her performing sketches alongside Hadland and fellow sitcom co-stars Patricia Hodge and Sally Phillips.
Hart will also appear in the upcoming Hollywood film The Nutcracker And The Four Realms, playing Dew Drop Fairy.
Posted by Scottish Falsetto Sock Puppet Theatre (and Kev F the comic artist) at 13:43 No comments: