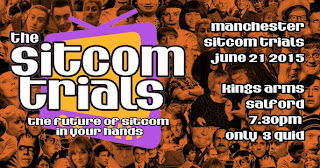 Hello. My name is Sean and I'm behind the Manchester heat of The Sitcom Trials. I know the submission deadline is looming and some of you may have already submitted stuff. I meant to do this sooner but I've been busy trying to clear my to do list in prep to read all of your scripts.

I want to talk a little bit about what I think makes a good script entry and, perhaps controversially, the answer isn't jokes*.

Let's start with a little narrative theory that pretty much all sitcom falls into. Sorry if this is teaching a fish how to swim for some of you. Todorov's theory of equilibrium is thus:

1. Equilibrium. Our hero is going about their day.
2. Disequilibrium. Something happens to affect their day. This can be your inciting incident (the thing that gets your story moving).
3. Our hero tries to restore order. (There can be multiple attempts – in sitcom these often make the situation worse).
4. A new equilibrium is established (though in sitcom it is often a return to the old equilibrium – Fletcher is still in prison, Ted is still on Craggy Island etc.)

Beginning. Middle. End. This sounds like common sense but you'll be surprised how often people forget this stuff.

Disequilibrium doesn't have to be a major event. It could be a little thing like running out of tea bags, getting a flat tyre or forgetting a birthday. The same goes for your cliffhanger.

Whatever your cliffhanger is, maybe you should make that your inciting incident. A story isn't about what happens, it's about how your characters deal with what is happening. That is the driving force of any comedy.

You don't have much time. Don't waste it with extraneous set up. A great example of expedient writing is Episode 2 of Father Ted: “Entertaining Father Stone” - the inciting incident has already happened – we're not dreading the arrival of Father Stone, he's already there.

Just because we're doing this on stage with zero budget doesn't mean you can't have scene changes. Try and keep your locations to a minimum but too often scripts read like over long sketches or one long meandering scene. I say you don't have a lot of time but you'll be surprised what you can fit into your script – the average TV sitcom episode is maybe about 25 minutes long and they often pack loads in. Cut anything extraneous and give yourself more time for action and gags. Enter a scene late. Leave early.

Kill your babies unless they absolutely deserve to be there. This will only set you free as a writer.

This is what most people remember about a sitcom. Not it's jokes – unless they are exceptional. They remember Captain Mainwaring's red faced pomp, they remember Hyacinth Bucket's phone manner, they remember Edina Monsoon's terrible fashion sense and desperation to be on top of new trends. How a character deals with situations is the key to any story.

The humour stems from your characters. Example: Father Dougal not remembering having met Sister Assumpta until they mention the jumper he was wearing.

What do your characters want? What stops them? How can/do they over come it? Every character, every scene and every story is driven by a want, both external and internal.

Both of these wants drive your dialogue, your story and are where the comedy stems from.

How do your characters fit into their situation? How do they react to each other and the problems they are faced with? What drives them? Who is our hero and who is the character that we associate with. Arguably, David Brent is the “hero” of The Office but Tim is the character that the audience latches onto.

*To qualify, by jokes I mean “gags” that have nothing to do with the story or characters.
**stuff happening, not car chases.

If you want to look at other advice written by people far more qualified than I then check out these links: