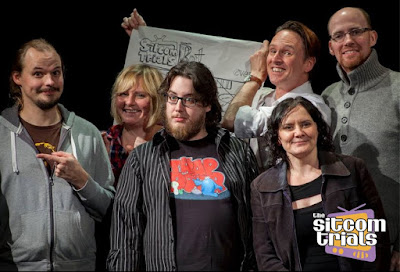 The Halloween Sitcom Trials took place at the Kings Arms Salford on October 25th, with four sitcoms, each with a spooky seasonal theme, going head to head in front of a live audience who voted for their favourite and only saw the ending of the winner. What were the results? 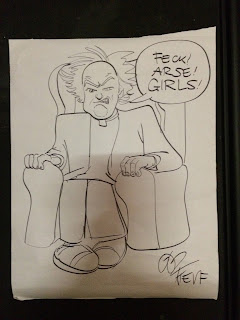 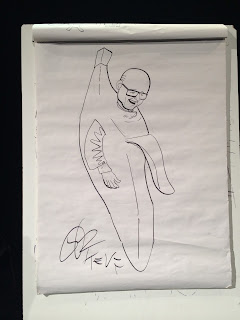 The first flipchart drawing is clearly Father Jack from Father Ted, but can anyone recognise who, and from the Halloween episode of which famous sitcom, the second picture's meant to be?* (Answer at foot of blog) Either way, these drawings by me were two of the prizes in The Pitch Fest (the audience members come up with their own ideas for sitcoms). But that's not what you're interested in. You want to know the result of the night... 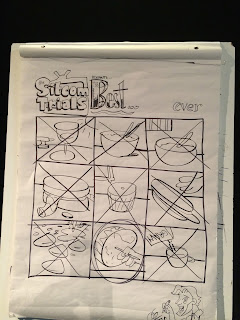 Well, as you can see, the audience voted and decided that the Best Use Of Food In A Sitcom was the cheese from I'm Alan Partridge, easily beating competition from the wine in Last Of The Summer Wine, Neil's lentils in The Young Ones, the porridge in Porridge, the cake with a jumper baked in it from Father Ted, a muffin from an episode of Friends, Homer's 12 foot hoagy from the Simpsons (runner up), Scooby Doo's Scooby Snacks, and Grandad's Christmas Dinner from Only Fools And Horses.

What's that you say? That wasn't the result you were waiting for? Fair enough.

The four sitcoms in contention were:
Everything You Ever Wanted To Know About Sects by Nathan Evans
Baby Driver by Christy White-Spunner
The Party by Sean Fee
After Steven by James & Brown

And the winner of the audience vote, and the sitcom that had its ending performed as a reward, was The Party by Sean Fee.

An excellent night's performance, stay tuned for the video following soon. Congratulations to Sean Fee and all of the writers whose sitcoms made it to the stage, and to Sean Mason and his marvellous cast who brought them all to life. Watch this space for details of forthcoming shows. 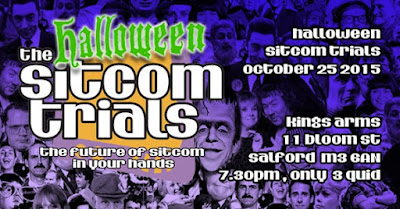 * It's Ade Edmondson as Eddie out of Bottom, dressed as a banana. Not, as many of you guessed, Heston Blumenthal cooking himself.
Posted by Scottish Falsetto Sock Puppet Theatre (and Kev F the comic artist) at 00:08