One team from this year's Sitcom Trials #SYTYWF final is taking the lead in the publicity stakes. This from Wales Online. 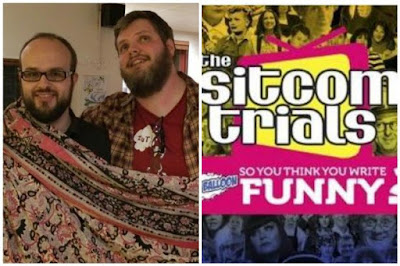 Two Rhondda comedy writers are hoping to emulate the success of Miranda Hart in the Edinburgh Festival Sitcom Trials Grand Final with their Cardiff-set comedy, Agents of L*O*V*C*R*A*F*T.

Mat Trow and Paul Hunt - who have been a writing team since their time at the then University of Glamorgan - will learn if their show is crowned winner on August 23.

Agents of L*O*V*C*R*A*F*T (which stands for League of Valleys and Cardiff Registered Adherents of Felicitous Tuning) is about a sceptical unemployed man forced to become a psychic detective for a league of mystics. 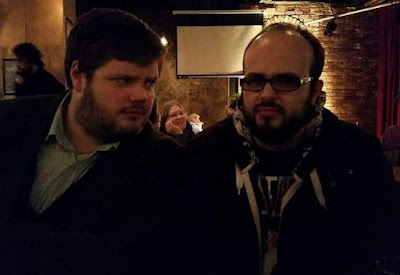 Mat Trow and Paul Hunt are off to Edinburgh, and might smile once they are there
The Sitcom Trials So You Think You Write Funny? Grand Final is on at 10.30pm, August 23rd 2016 at The Gilded Ballon, Edinburgh Fringe. Tickets here.
Posted by Scottish Falsetto Sock Puppet Theatre (and Kev F the comic artist) at 03:05